Watching videos using a plasma cutter cutting metals may seem easy. And it’s true, once you have your own plasma cutter you’ll get to cut many things you didn’t realize you could do. From cutting the softer metals like aluminum to the thickest steel, cutting them all would be a breeze with a plasma cutter.

However, do you know how you can make use of your torch’ qualities for an easier and quicker cut? The secret lies in the type of torch you need to use and what goes on with its tip. So this time I am going to discuss with you about the types of torches and how you’ll get to utilize the plasma cutter tip and the standoff guide so that these torches can serve as quality investments. 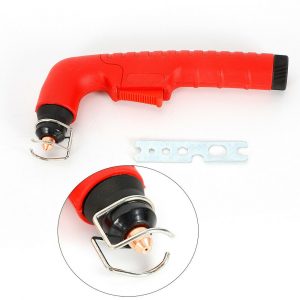 There are 2 types of plasma torches  your preference will depend on the thickness of metal you want to cut and these are the pilot arc and the non-pilot arc torches.

The pilot arc plasma torches generally require high voltage  and they need high-frequency discharge of plasma to create an electric arc. When using them you don’t have to hover the nozzle of the torch very close to the metalwork because that the electric arc starts before the nozzle touches the metal.

Pilot arc plasma torches although they can cut metal sheets just as easy, are also preferred in cutting thick metal. The best example of the pilot arc torch is the SG-60 which I am also using.

Non-pilot arc plasma torches will only allow the plasma to create an electric arc once the cutting tip touches the metal. Welders use them preferably for cutting up metal plates and thin sheets of metal and a good example of these is the PT-31 torch.

Yet, the problem I see when using a non-pilot arc torch with a plasma cutter drag tip is that you have to clean out the rust or paint prior to contacting the torch. Otherwise, there will be no jumping of the electric arc since the cutting tip needs to contact the metal.

But did you also know that these two types of torches have certain qualities that you can exploit to make a quicker cut?

What I mean is that the PT-31 has the plasma cutter drag tip while the SG-60 has an interchangeable ceramic cap wherein you can put on a plasma cutter drag shield. But how are these characteristics able to quicken and ease up your cutting job?

To know which of these qualities can be more convenient to you especially when cutting metal sheets, we will now do the plasma cutter tip vs standoff guide discussion.

What is a Plasma Cutter Drag Tip?

The plasma cutter drag tip is a type of a cutting tip that protrudes from the tip of your plasma torch which the PT-31 torches are generally equipped with.

The best thing about having the plasma cutter drag tips is you can cut thin metal easily with it while dragging the tip along the metal. Even at below 50 amps, you can cut in a straight line or contours like following a pattern easily. You can also tilt the torch sideways to see how the arc is going on and you can effortlessly control the movement  to go faster or slower.

However, when cutting thicker metal in which you have to go above 40 amps, you have to use a pilot arc and keep a good distance between the tip of the torch and the workpiece. The higher the amps, the more powerful the arc can become. Otherwise, if you drag the tip of the pilot arc torch like the SG-60 on the metal, you can have a backsplash.

Backsplash in plasma cutting is the splashing of the arc back to the cutting tip which can erode the tip of the nozzle so eventually, a backsplash can shorten the life of your cutting tip.

There are two ways to avoid backsplash. One is to prefer a pilot arc torch wherein you don’t have to touch the metal with its tip and two, use a standoff guide for more effortless cutting while keeping a good distance between the nozzle of the torch and the metal work piece.

What is a Plasma Cutter Standoff?

A plasma cutter standoff which is also called by many welders as the plasma cutter drag shield is a small piece of metal contraption that you can put on over the ceramic heat shield of torch to provide distance between the cutting tip and the metal about 1/8 of an inch.

There are three main reasons why people prefer to use standoff  instead of the non-pilot torches with a drag tip plasma cutter. First, it allows for an easier glide of the torch above the sheet of metal without any part of the torch touching the metal. Second, you can comfortably stand the torch while making the contouring process or following a pattern.

Third, because the tip of the torch is not touching the metal, this prevents the backsplash. And lastly, because you are most likely to use a pilot arc torch when cutting rusty or painted metal, you don’t have to clean up the metal unlike using a torch with a plasma cutter drag tip.

As mentioned, torches with plasma cutter drag tips like the PT-31 are good for cutting up metal plates or thin sheets of metal. While the pilot arc torches which you can equip with a plasma cutter standoff guide when cutting up thin metal can perform best with thicker metal even without the standoff.

Tips When Using the Drag Tip and Standoff Guide

If you’ll be using a torch with a plasma cutter drag tip where you want to start cutting right in the middle of the metal sheet, you can drill a hole first on the metal sheet regardless if it’s thin or thick and this is where you can blow your arc as a start guide. Then you can set your pace depending on the thickness of the metal. In this manner, you can lengthen the life of the cutting tip of your non-pilot plasma cutter while preventing backsplash.

Using a pilot arc torch with a standoff guide, on the other hand, can also help you relax your hold on your torch and you can use your other hand to hold your metal in place. I usually use the standoff guide when cutting a metal plate on a long stretch and I won’t feel the strain in my cutting hand.

However, whenever I need to cut thick metal, I would prefer to use my SG-60 and go slow but without using the standoff guide especially when I’m cutting up a metal bar.